I am putting the Mr Foster Monkey on hold for a bit. Not to say I won’t work on him at all, but not as fervently. I want to focus on getting my MIL’s cardigan done. It is coming along. I am holding a nice pace on the body now. Because I am worried about running out of yarn, I switched the colors around a little from how they are in the sleeves. I don’t think it will be badly noticeable. As a matter of fact they suggest it in the book as a way to change things up and make it more interesting. I think being it is a fair isle design it will come out nice.  Now that the body of the sweater is going strong I am enjoying this project much more.

I have finished the knitting up of the Baby Kimono sweater and started with the seaming yesterday. The sides came out beautifully, but the underarm seam looked awful! I took it all out and started a thread on Ravelry asking for suggestions for a nicer stitch for seaming these arms. Here is a picture of how it came out the first time. 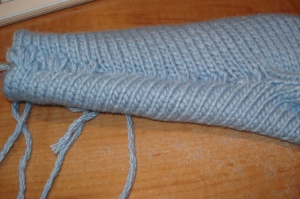 I have gotten a couple of suggestions. One is a crocheted slip stitch which I may try. Or I will just try the grafting stitch again, but looser. You can see that my tension was not consistent and that may have been the problem. Here is another picture of it after. I will add that this Reynolds Rapture is soooo soft after blocking. Wow. Nice stuff. 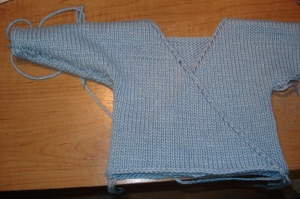 And now for some depressing news. It has been nearly a month since I ordered my Jamiesons DK for the Alba Jacket I have been planning and it has not arrived. I spoke to Nina at Camilla Valley Farms where I had ordered it and she is putting a tracer on it. Hopefully it is just stuck in customs and it will arrive. I am hoping and praying it is not lost. If it is I will not be able to afford to replace it and the Alba Jacket will have to wait until next year. I am so disappointed. I should have had her insure it but did not think of it.

On a more happier note, I have sold a collectable book I owned for enough money to buy a sweater kit from Virtual Yarns! I ordered the Luskentyre. It was such a hard choice. I really love the Marina and Rona as well. Maybe someday I will be able to order these. The exchange rate has gone down enough that it is much more affordable to get these kits for VY and I did not want to miss my opportunity. This will not be on the project list for this year, but I will start it as soon as I can!

I have one more thing to share. I purchased a ‘pattern’ yesterday from Big Sky Knitting and I am very impressed. It calls itself a pattern, but it is more like a booklette for top down knitting. It comes in 8 parts and in these parts each step of the construction is meticulously spelled out. These instructions can be used for many patterns if you want to knit them top down. I am going to try using it for Marc’s Duxbury Point Sweater that I will be making for him. I plan on starting this very shortly. The ‘pattern’ is by Janet Szabo and is called The Follow the Leader Aran Knit Along or FLAK. Great stuff and only $8! Worth every penny! You will be hearing more from me about how this works out!

2 thoughts on “No More Monkey Business”

Support my site — Buy a Pattern 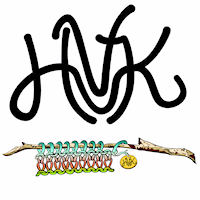